In 1973, when I began interviewing former/retired U.S. military personnel regarding their UFO experiences at nuclear weapons facilities, I didn't give much thought to the possibility that the intelligence community would take an interest in my activities.

At that point, the CIA's "Robertson Panel" Report—which recommended surveillance of American UFO-research advocacy groups—was still classified. Indeed, as far as the public knew, the only component of the U.S. government responsible for UFO-related matters was the Air Force.

However, that myth slowly faded away as classified documents began to be pried loose for public inspection via the Freedom of Information Act (FOIA). By the early-1980s, the involvement of the FBI, the CIA, and the NSA in the collection of UFO-related data had been firmly established.

My own naiveté regarding what I considered to be the remote possibility of covert surveillance of my own activities was shattered in early 1982, shortly after I first went out on the American college lecture circuit to report my findings. Those public programs resulted in media coverage by numerous newspapers, including the New York Times, as well as the Associated Press and United Press International.

In 2012, veteran UFO researcher and Freedom of Information requestor Larry W. Bryant sent me a letter he had received from the FBI—in response to an FOIA request on my behalf—in which the bureau acknowledged that their records indicated the existence of files on my UFO-related activities. However, according to the letter, a search for those files was unsuccessful because they were supposedly "missing". Neither Bryant nor I believe that to be the case.

The first indication I had that someone was monitoring my research activities came within months of my first national publicity. It was/is my practice to tape record my interviews with the military veterans—who have described observing UFOs maneuvering near or hovering over ICBM sites, nuclear weapons storage areas, or similar locations. Beginning in February 1982, after each and every telephone conversation with one of those individuals, recorded with their permission, it became clear that someone was tapping my phone.

After each interview, only moments after hanging-up, I received a mysterious call from someone who said nothing, even though I could hear background noises, who then hung-up after 30 seconds or so. I stress that this odd pattern only occurred after I had spoken with this or that veteran, who was divulging dramatic information about one nukes-related UFO incident or another. It never happened after one of my calls to my family or friends, or at any other time. The pattern continued for several months.

Obviously, someone was attempting to intimidate me or, at the very least, was just letting me know that they were aware of who I was talking to. As I have repeatedly said over the years, I guess I was too stupid to be scared because I continued with my efforts to learn what the U.S. government was hiding from the public, relating to UFO activity at nuclear weapons sites.

I now have more than 140 U.S. military veterans on-the-record—I just spoke with a new source earlier today, a former Minuteman missile Electro-Mechanical Technician who sighted a UFO at Minot AFB in 1968—and I am happy to report that the FBI has never contacted any of those guys. In other words, regardless of who was tapping my phone, there were no repercussions for the persons who had agreed to speak with me. And, to date, no one has ever shown up at my door either.

That said, in one recent case, someone did learn about my telephone and email communications with a retired Air Force missile targeting technician who had made a few inquiries on my behalf, relating to a widely-publicized missile communications-disruption incident at F.E. Warren AFB, in Wyoming, on October 23, 2010.

That individual was in touch with a few of the active duty missile maintenance personnel who had responded to the problem, during which 50 ICBMs became temporarily unavailable because the base could not communicate with the launch officers who controlled them. Officially, the disruption had lasted 59 minutes and was caused by an improperly-replaced computer card in a weapons-control processor.

However, what my retired Air Force contact learned about the incident, from the missile maintenance techs who had responded to it, was much different: The event involved an intermittent communications disruption that actually lasted more than a day, not a mere 59 minutes, as the Air Force claims.

More importantly, several independent maintenance teams returned to the base reporting their sighting of a huge, cigar-shaped object in the sky above the missile field. My contact was told that the entire missile maintenance squadron had been unexpectedly assembled and admonished by its commander not to speak about "the things they may or may not have seen" in the sky. Clearly, the aerial object was not a blimp.

Unfortunately, I was later informed by my contact that two of those missile technicians, upon retiring in June 2011, were informed by their superiors that a "flag" had been placed in their Air Force service records, relating to their unauthorized disclosures about the incident.

Obviously, someone had been monitoring their emailed conversations with my go-between, who later forwarded their comments to me. This development meant that the two men would have difficulty finding work in the aerospace field after leaving the service.

I of course felt very badly about this development, even though my contact has said that the two individuals had been fully informed that he was passing information on to me about an apparent UFO maneuvering above F.E. Warren's nuclear missiles during the communications-disruption incident.

In this type of situation—where active duty Air Force personnel leak information about UFOs near nuclear weapons sites to outsiders—the Pentagon becomes trapped by its own deceptive policy of claiming that UFOs pose no threat to U.S. national security. (It was this official stance—UFOs, even if they exist, are not a threat—that was used to justify the closure of the Air Force's UFO study, Project Blue Book, in 1969.)

The two individuals who reported multiple sightings of the huge cigar-shaped craft by missile maintenance teams at F.E. Warren AFB in October 2010—at a time when 50 ICBMs were effectively offline—cannot be prosecuted for divulging classified information because, among other repercussions, the Air Force higher-ups would have to openly admit that they took the UFO reports seriously and went so far as to admonish an entire missile squadron not to talk about the incident.

In short, any open prosecution of the two men would risk turning a media spotlight on the whole affair, thereby raising public awareness about the true nature of the event—something the Pentagon definitely does not want to happen.

And so the game goes on. The Air Force continues to claim that UFOs pose no risk to U.S. national security. Meanwhile, veterans slowly but surely come forward to report UFOs at various nuclear missile bases—as far back as 1962 and as recently as 2010—which often appeared just as some of America's nuclear missiles mysteriously malfunctioned. Maybe, someday, the public will be let in on the truth.

Last week, Larry Bryant sent me a letter he had composed on my behalf, directed to the National Security Agency (NSA), asking that any and all NSA files containing information regarding my UFO-related activities to be released to me, pursuant to requirements stipulated in the federal law known as the Privacy Act. That missive has been inserted below.

I suspect that, after a lengthy runaround, I will be told by NSA that no such files exist. Or, perhaps, those files will be discovered to be "missing" just like the FBI files on my research activities. Regardless, the agency certainly will not be candid with me, no matter what the facts are. 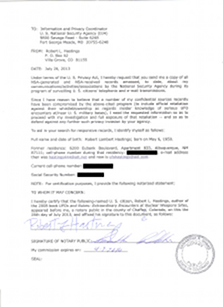